The Wonderful World Of Black Cats 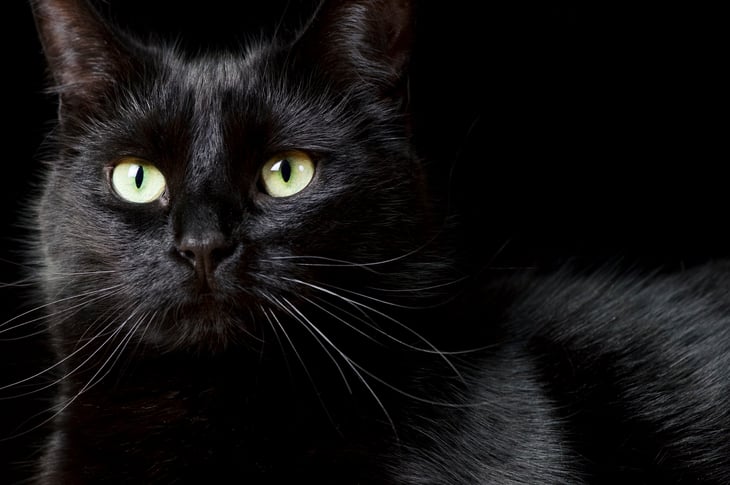 It’s a chilly evening in October and you’re hurrying down the sidewalk, eager to get into your car and head home. All at once, the streetlight nearest you abruptly goes out, a cold wind ruffles your jacket, and a small black cat trots across the sidewalk directly in front of you. Thanks to the centuries of myth and lore surrounding black cats, this scenario still might rattle you a bit (even if you aren’t superstitious).

The view of black cats as harbingers of bad luck probably has its origins in witchcraft lore. In Western history, black cats were considered the companions of witches, or to possess the ability to turn into witches themselves, and were often burned alongside those accused of being witches. In truth, many cultures have myths and beliefs about black cats bringing good luck rather than bad.

Black Cat Myths Throughout The Ages:

It’s a well-known phenomenon among shelter workers that black cats take longer to adopt than their lighter-colored peers. The suspected reasons for the discrepancy in adoption rates vary:

Because black cats have long been associated with witchcraft, Halloween, and bad luck in the U.S., they are at higher risk for becoming the victims of pranks, abuse, or worse during the Halloween season. We recommend keeping all cats (black or otherwise) indoors in the days leading up to Halloween and especially on Halloween night. Because accidents do happen, and cats can easily slip out of an open door during the commotion of a costume party or trick-or-treating, make sure you update his or her microchip before Halloween.

Have a safe and paw-some Halloween, from all of us at VitusVet!